Last week, I was pleased to see a full spread in the Jackson County Advocate on the upcoming school board elections in the Hickman Mills School District.  I appreciate the Advocate providing this information to area residents.   I was very glad to read the candidate responses, in their own words - - or at least, it was supposed to be in their own words.  As I began to read through their answers, I kept getting a strange sense of deja vu.  Mr. Anderson, Ms. Forte and Ms. Graves seemed to have a remarkable similarity in some of their answers.  It seemed clear to me that their answers were copied directly from another document.

I don't know if it is Freedom Inc. or a new organization with a new name, but clearly someone IS directing the thoughts and actions of these three candidates.  This is not what our schools need.  We need people on our school board who can answer a questionnaire without a cheat sheet.
Posted by jennycherie at 6:43 AM No comments:

First, here is the program: 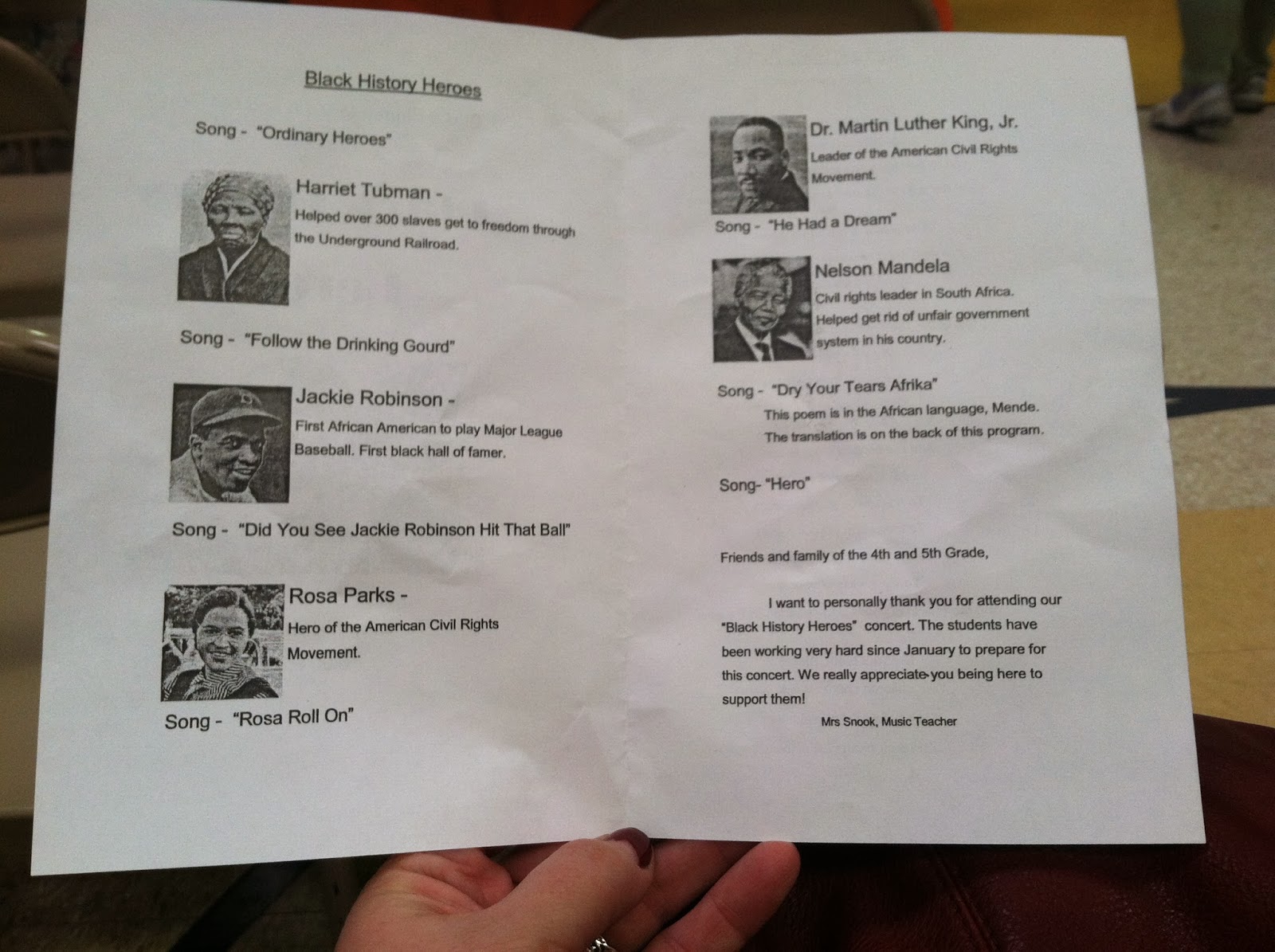 These videos are from the second half of the evening performance.  Though the number of students is substantially reduced, they did a great job!


Posted by jennycherie at 3:53 PM No comments:

March 11, 2014: Fourth and Fifth Grade Students at Burke Elementary perform a program honoring Black History Heroes.  These videos are from the afternoon program AKA final rehearsal.  Part one includes the program introduction by Mrs. Snook and the first song, "Ordinary Heroes."

The first hero honored was Harriet Tubman.  This song is called, "Follow the Drinking Gourd."

Part three, in which Holly Ort and Fernando C. tell us about Jackie Robinson.  There were technical difficulties, so the first part was cut off.  The students then sang "Did You See Jackie Robinson Hit That Ball," which was a clear favorite!


Rosa Parks was the next honoree.  Her song was called, "Rosa Roll On."

Sadly, after Rosa's song, my phone was out of room for videos.  Our librarian has a long video of the whole program that can be found at


Posted by jennycherie at 9:11 PM No comments:

Just remembered that I had done nothing with the one and only parade we got to watch this year!  The Ruskin High School Golden Eagle Marching Band marched well in Warrensburg.  We thoroughly enjoyed the parade.  This was Ainsley's first time out as our primary photographer and videographer and she did a fabulous job.  She took more than 200 photos of the parade!  That's far too many to share, so I will only share a few.
We loved the bands.  There were SO many from surrounding school districts.  I was especially impressed at the bands who marched along, some with fewer than 20 members and with drums/sousaphones that were clearly aged and infirm.  But they were great!
I especially loved the bands in black and gold uniforms.  Plus, this band had capes.  Everybody loves a good cape when they are marching. 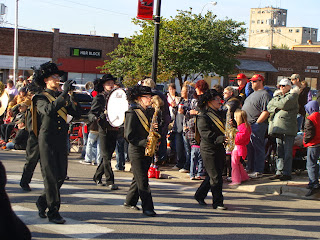 And look at this twirler!  I thought Ainsley did a great job of catching her demeanor.  She was doing an amazing job of twirling and tossing and catching that baton without looking the least bit stressed out.  She was just marching along, la-di-da, not a care in the world, and never dropped it! 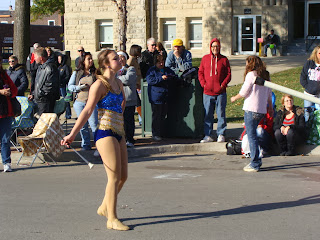 After a VERY long wait, we finally got to see Ruskin.  The first pass by, we realized we were on the wrong side of the street.  You can barely see Jarom in this first video.
We cut across an alley so we could watch the band go by again.  This time, we did a better job of positioning ourselves so we could see Jarom.  In the process, I came close to knocking over an innocent bystander.  Fortunately, he was a good sport.  You can hear him cheering the band on.
In the last video, we are mostly behind the band.  We knew we had to quit following them at this time, but they were starting up my favorite cadence and it is pretty fun to watch them go!
﻿
Posted by jennycherie at 7:11 PM 2 comments:

Thursday, November 7, 2013 was the first orchestra concert of the year for Ruskin High School and our Ainsley's first concert with the full high school orchestra.  They played six songs. We did not catch everything on videotape, but here is what we have!

A snippet of Perseus by Newbold:


A snippet of Russian Easter Overture by Rimsky-Korsakov/Alshin:

Ugh.  I can only get two snippets to load.  I will try separating into multiple posts or I may try uploading to facebook.

Posted by jennycherie at 7:19 AM No comments:

It's that time of year again: November

Once November arrives, the social networking sites come alive with those who want to express gratitude for something new every day.  It's a lovely thought, and a great reminder to count our blessings, be they big or small.  I'm not much for posting anything daily, but today I have been feeling the love and the gratitude for where we live.  This is a crazy world we live in.  There is so much to be disappointed in, and so much to be fixed or changed.  But today, as I was driving through my neighborhood, instead of seeing the problems, I saw the things I love.  I don't live in one of those neighborhoods that is considered desirable.  I live in a neighborhood that is reasonably priced with schools that have a bad reputation in many ways.  I have lived in this part of Kansas City for more than fifteen years.  And after fifteen years here, in spite of its quirks, there is a lot to love here.  Like this tree: 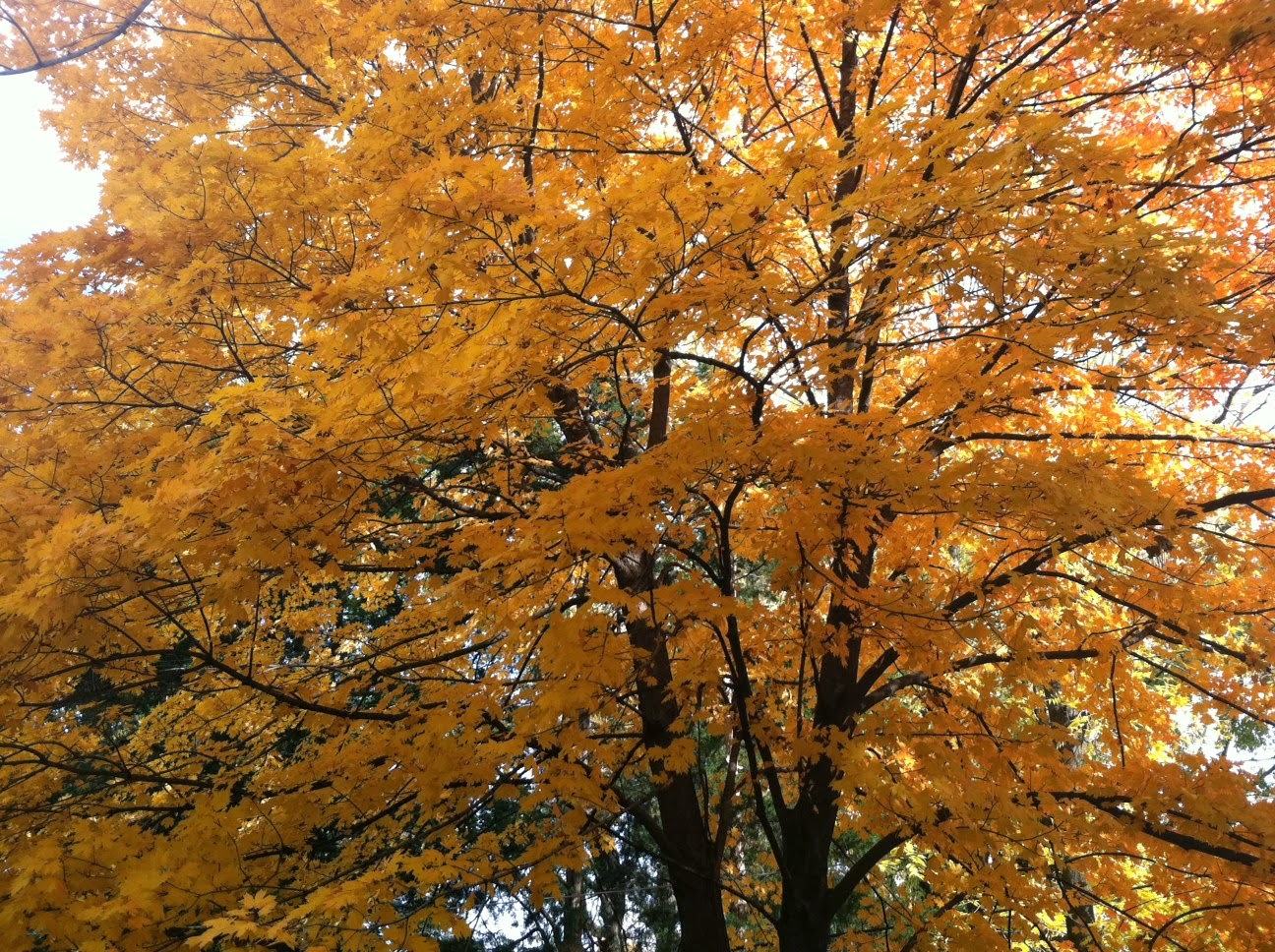 The trees in Kansas City are always beautiful, but especially in the fall.  This particular tree is hanging over my driveway.  It is one of the trees that is not only colorful, but also very healthy so as not to pose an immediate threat to my care or home.  I love this tree, and the colorful ones that peak over the roof of my house when I pull into the drive.  ﻿ While I am thinking of it, I love this house.  Like the neighborhood, it has its quirks.  Some of them came with the house and some we have inflicted on it, but I still love this house.  It isn't big and it needs more fixes than I can list, but this is the home where I have raised my children.  Our oldest two children may vaguely remember apartments before this house, but this is the home that has taken care of our family for so many years. In spite of its problems, I love it.  This is also the home where we lived when all of our children headed off to school for the first time.  Speaking of which:

I love this school.  It has its ups and downs, but all of my children have attended this school for grades K-5.  It may not meet the standards when we compare to other schools in nicer neighborhoods, and yet, my children have learned a lot here.  And I love that we are part of the community formed by our schools.  When I need to stop by the elementary school for PTA something-or-other and happen to have a teenager with me, I love that they get to see some of their old teachers and that they can't keep from poking around to see how things have changed since they moved up.  I like that as my younger children move up through the schools, their teachers can easily connect them to a family since they know my older children.   I love that I have friends (and my children have friends) who we have known since Kindergarten.  And I love the teachers and staff who continue to stay in our district, in spite of its problems, and who keep working to make a difference.


Today, I am just grateful to be where I am.  I am grateful for the familiarity that comes from living in the same place for a long time.  I may hope for a bigger house with two bathrooms or a nicer neighborhood or better schools, but until that happens, there is a lot to love here.
Posted by jennycherie at 8:19 PM No comments:

Update on the Hate

Just a quick post:  In spite of my general dislike of the smell and taste of many essential oils, I am adjusting.  Gradually, I am coming to depend on the most detestable (in smell and flavor) of all oil blends:  DigestZen.  If I have a bout of nausea, it helps quickly.  In my last post, I had taken DigestZen internally in a capsule because I find the taste so offensive.  Since then, I have been using it quite often and have found that it works more quickly if I just take a drop of it without the capsule.  It is strong, but it is not any worse than your standard cough medicine.  When I take it this way, it also works quickly and clears my sinuses at the same time.


In addition, on the very rare occasion that I have heartburn, DigestZen calms it very quickly.  I am hoping that using it regularly will also help to calm the reflux that has damaged my vocal chords.  This type of reflux (Laryngopharyngeal Reflux or LPR) normally does not cause pain or burning, so there is no warning that it is causing damage.  At this point, it is just hope and speculation, but I feel confident that I won't do any additional damage by trying.

Another oil that I am using frequently:  melaleuca.  No joke!  I use it on cuts or scrapes, which happen frequently around here.  It is supposed to help all manner of skin ailments, so I am also hoping it may help to conquer the dandruff that is running rampant in our household!

jennycherie
I am a married mother of four children, ages 10, 13, 15 and 17. I have been married for 18 years to Michael. I teach Spanish at a small, private college.